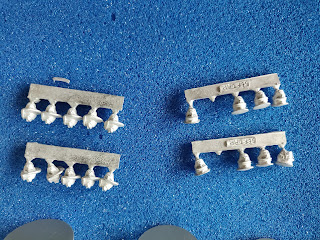 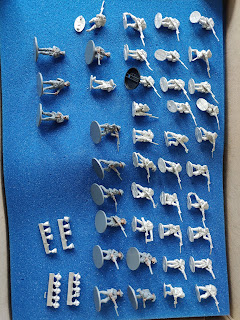 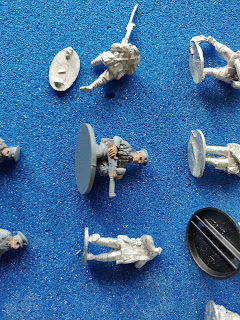 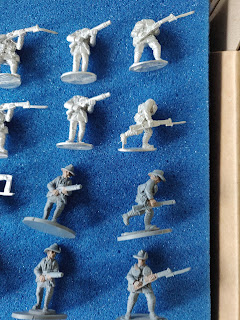 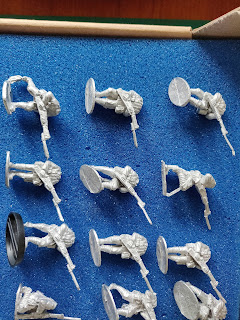 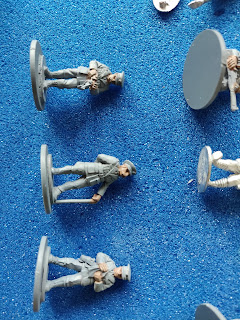 After a busy two weeks I finally had time to sit down and have some quality painting time over the weekend. What follows are the results (obviously still very much Paint in Progress).
The skin and hair is mostly done (only some touch ups left), but the rest of what you see still needs all of the washes and layering done to it. I'm quite pleased with my self;  quite the productive day!

That's it for now. If the light holds out in the next couple of evenings, I might be able to paint my way through most of it!

After getting a new job at the beginning of the year my hobby time evaporated at astonishing speed. That and the local unavailability of the "Varjazi & Basileus" supplement (which incidentally has the rules for playing Byzantines) severely dampened my enthusiasm for SAGA. It went on the backburner as did most of my painting.
Trying to come up with ways to still keep a hobby, I came across the game "Frostgrave" not too long ago. Not exactly historic wargaming, but with a maximum warband size of 10 and a rule system that took me back to my youth and playing Mordheim, it definitely hit a soft spot!
The rules came in yesterday, or to put it more precise, I returned from my holidays and found them in the mailbox. After a quick read through, I came up with the following:

The druid will have the following spells:

I've taken the liberty to interpret the Explosive Rune as a type of Fungus the druid can summon and the Bones of the Earth (a necromancy spell) as a classic entanglement of roots. 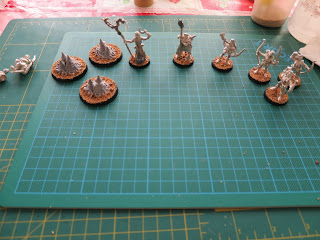 The warband as a whole 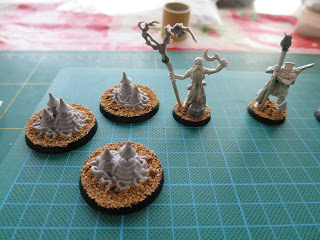 The druid, his apprentice and 3 Exploding Mushroom markers 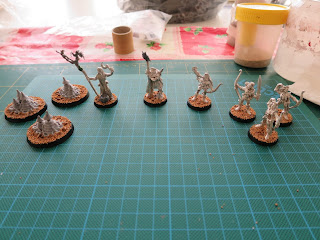 Another shot of the warband 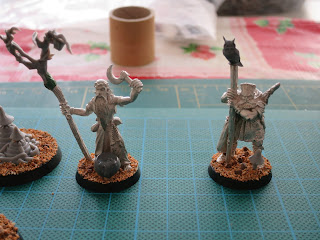 A close-up of the druid and his Owl wielding apprentice 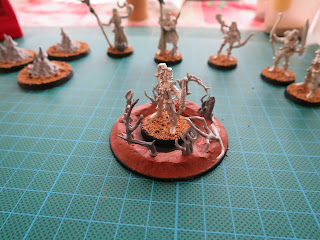 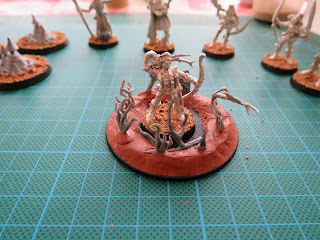 And a second shot from a slightly different angle. Note: this is still WIP!

Right. It's been several days, but I've managed to squeeze in some painting time with good results! I've been able to finish off another two models, thereby creating my first true point of SAGA Byzantines. I hope you'll enjoy the results, I certainly am! 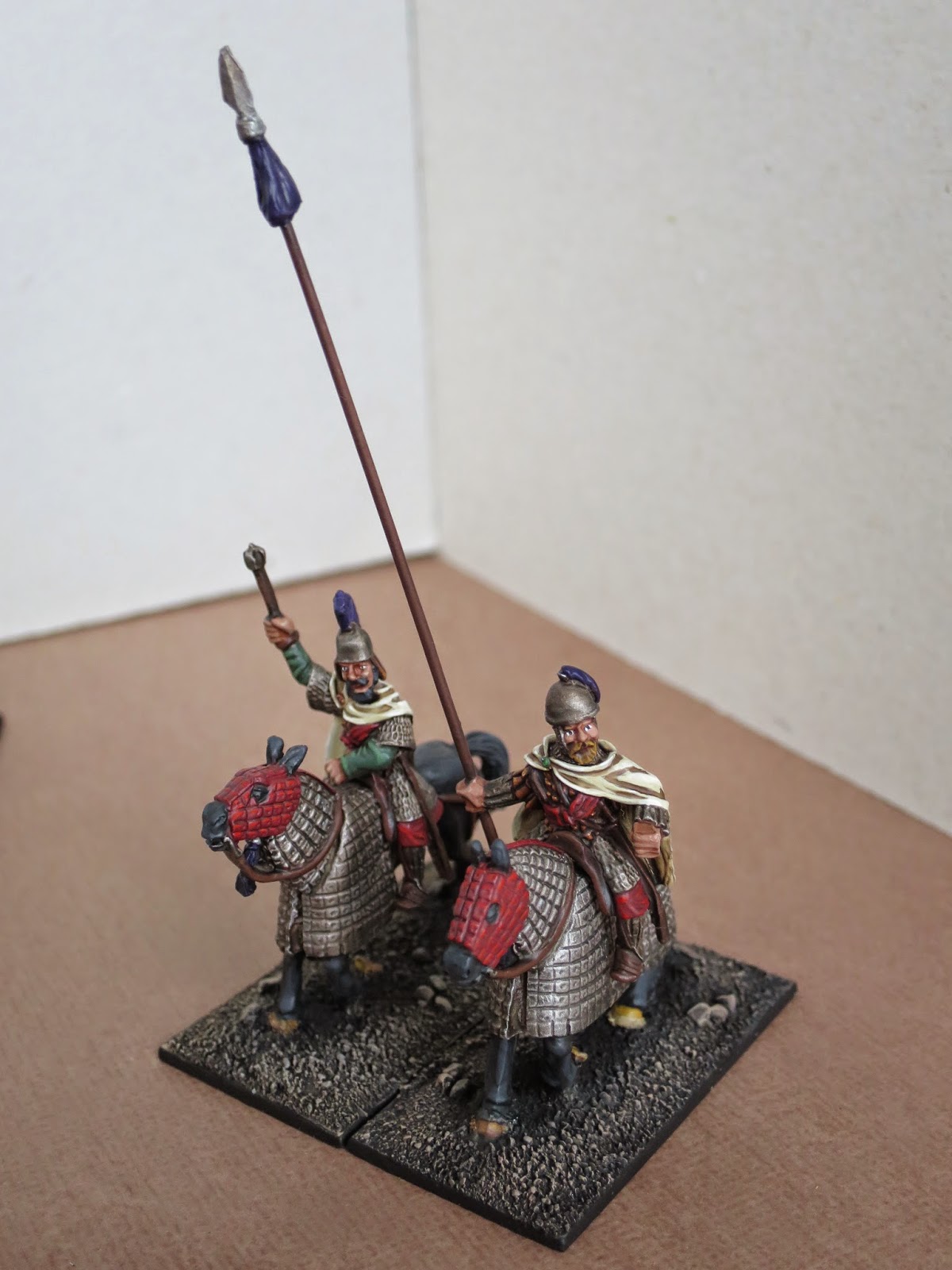 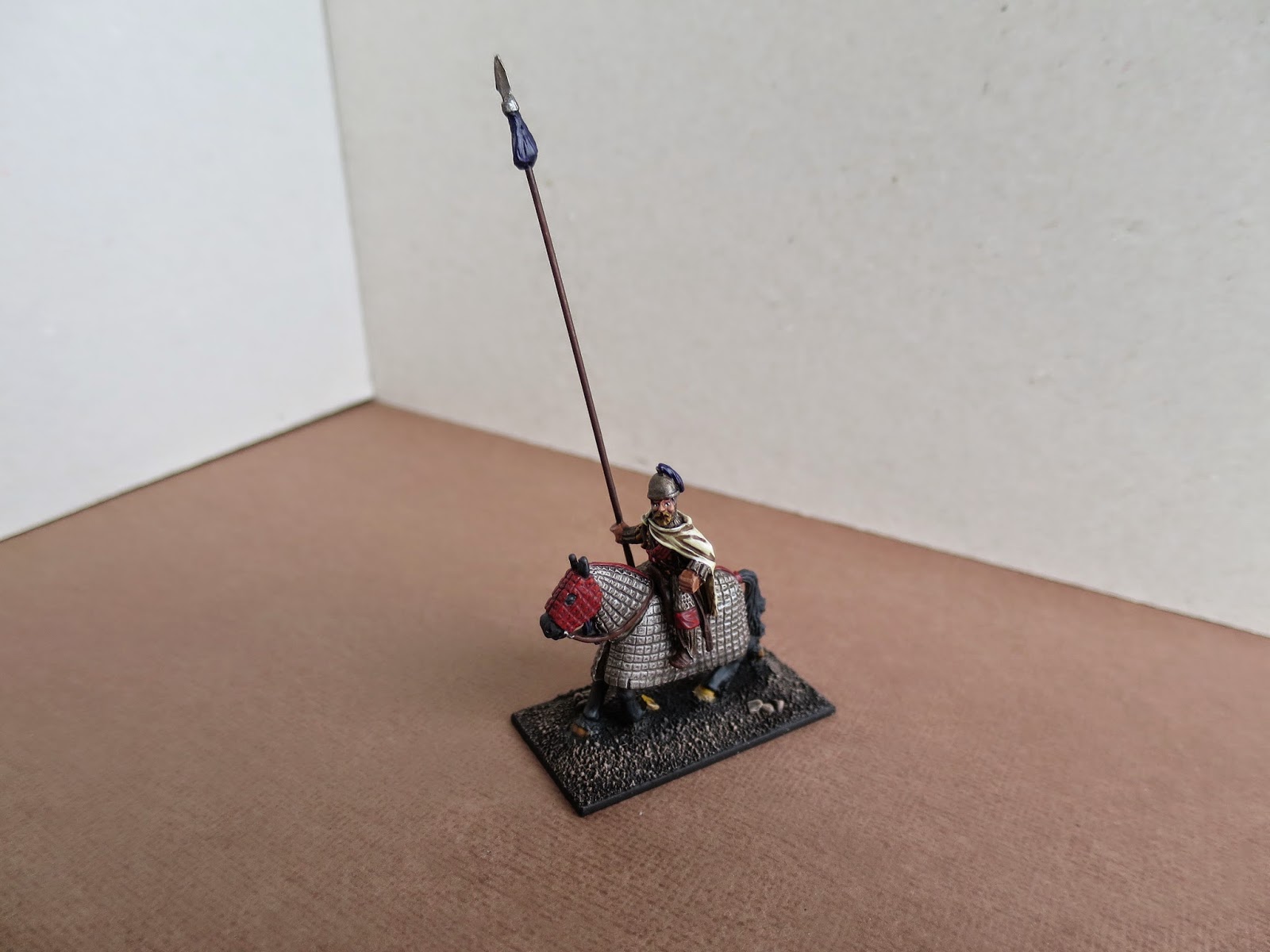 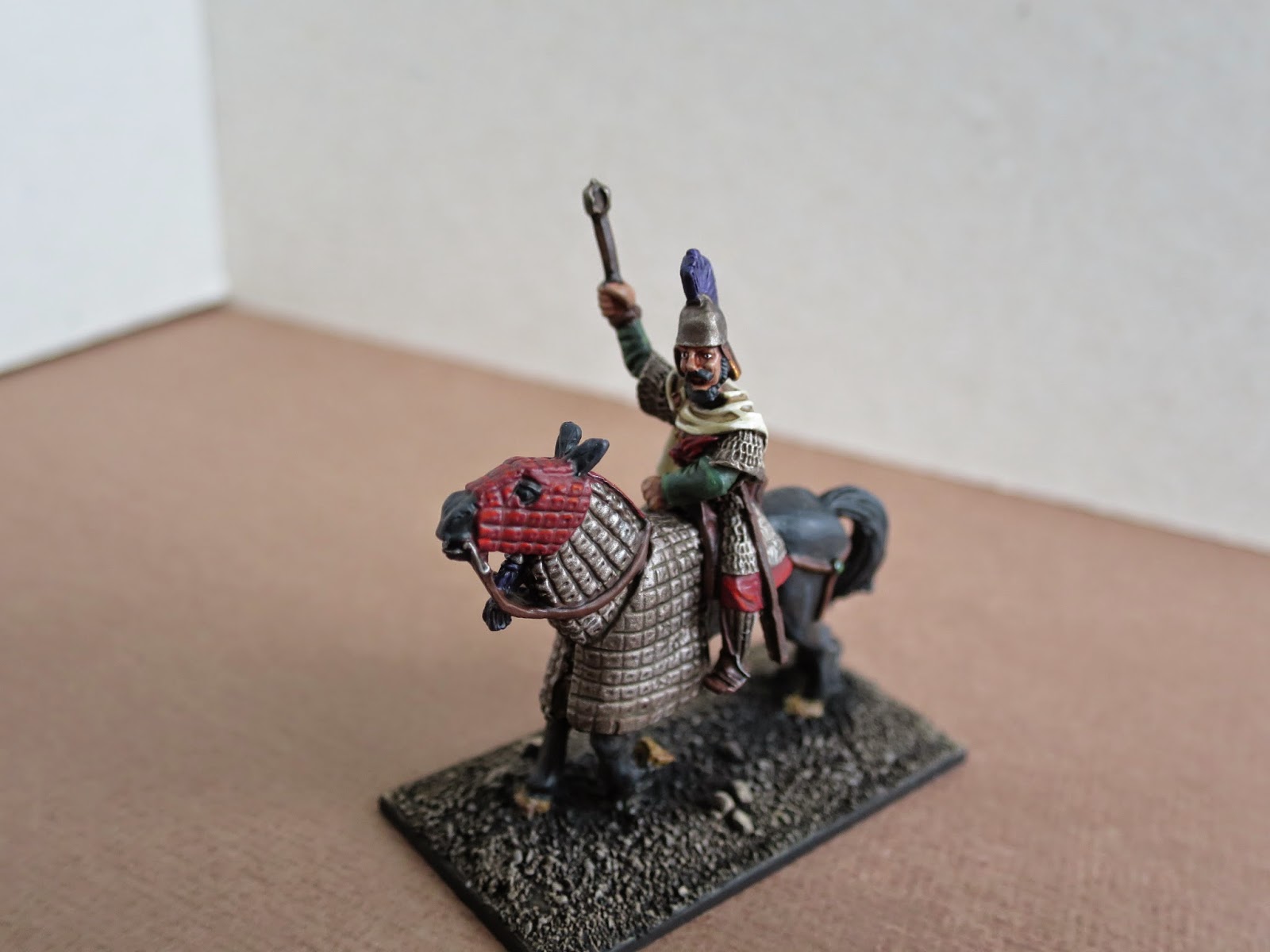 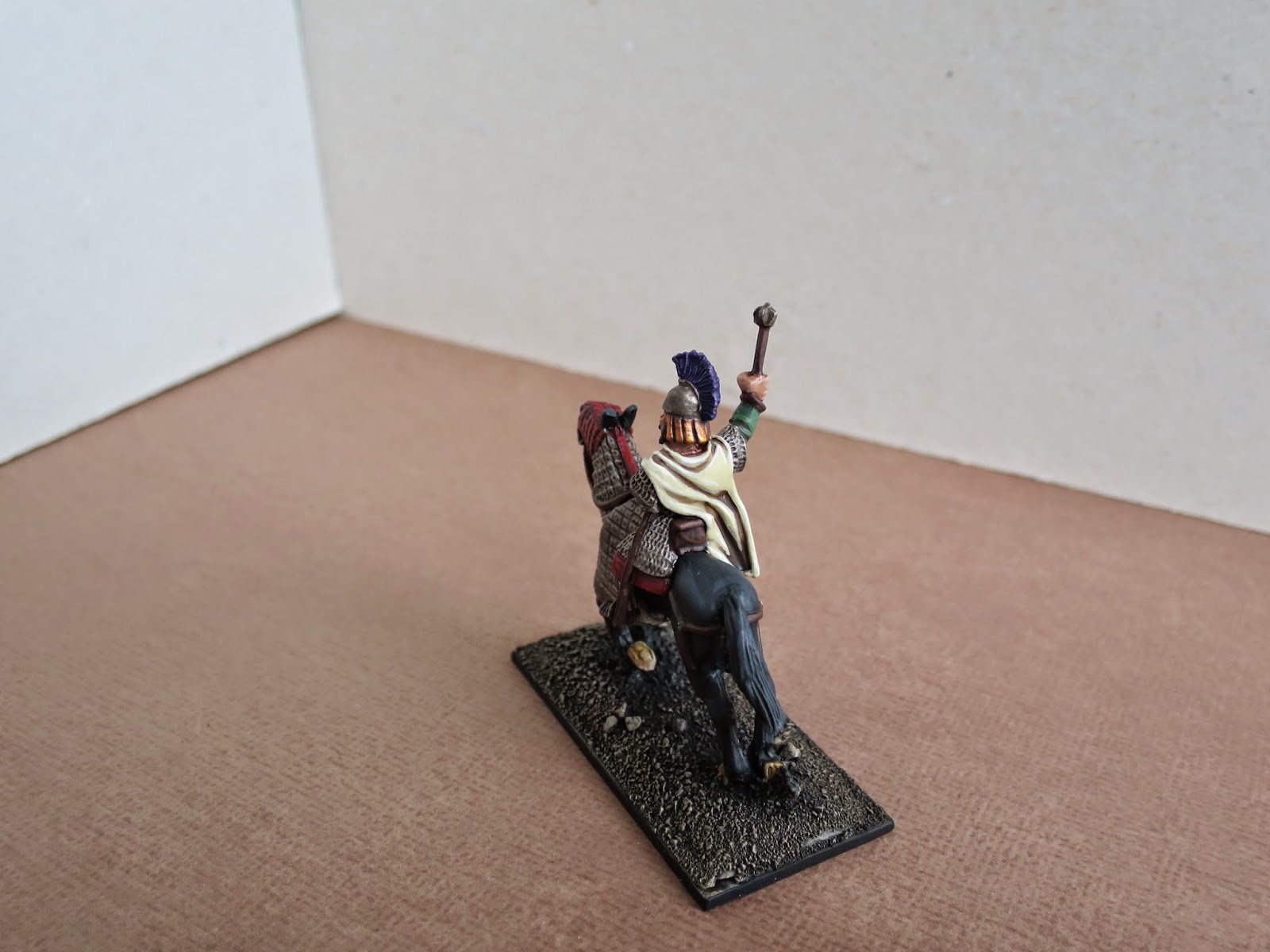 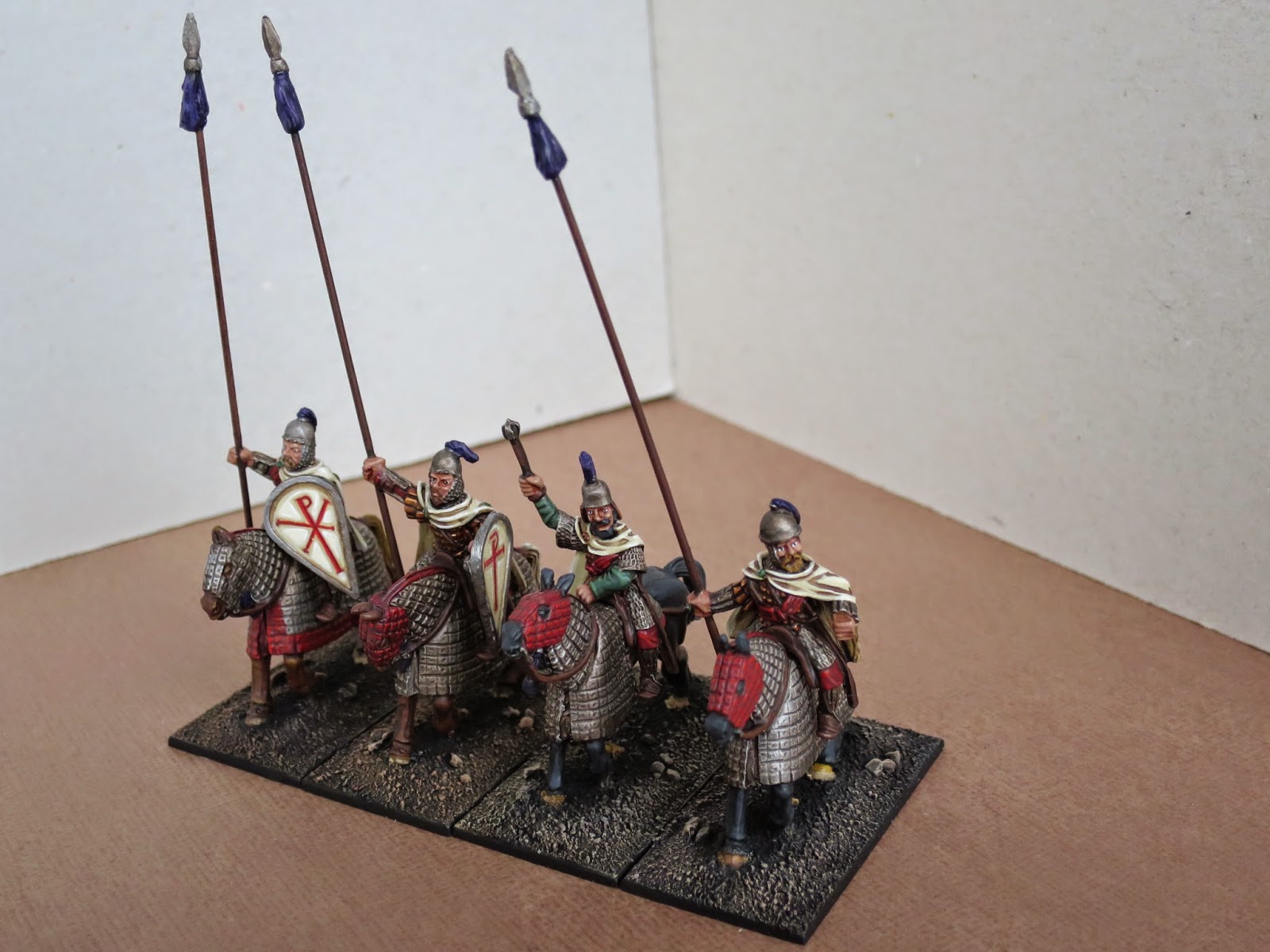 Technically, all of these are still works in progress, with me still having to spray several coats of varnish and add tufts, turf and flock. I'll have to wait till it's less humid. Until then,  this should suffice when presented on the table.

Now onward to the next point! I'll try to add some more work in progress shots next time, so you can see how I build up the base and the models.

Time for the first update of this blog. It's been a while, but seeing as everyone was busy celebrating both Christmas and New Year's Eve, I thought we could all use a little break. Of blogging that is. Because over the holiday period I HAVE started to paint my first batch of Byzantines (hurray!). And of course, it's about time I shared some pretty pictures with all of you. First up are some mounted hearthguard. 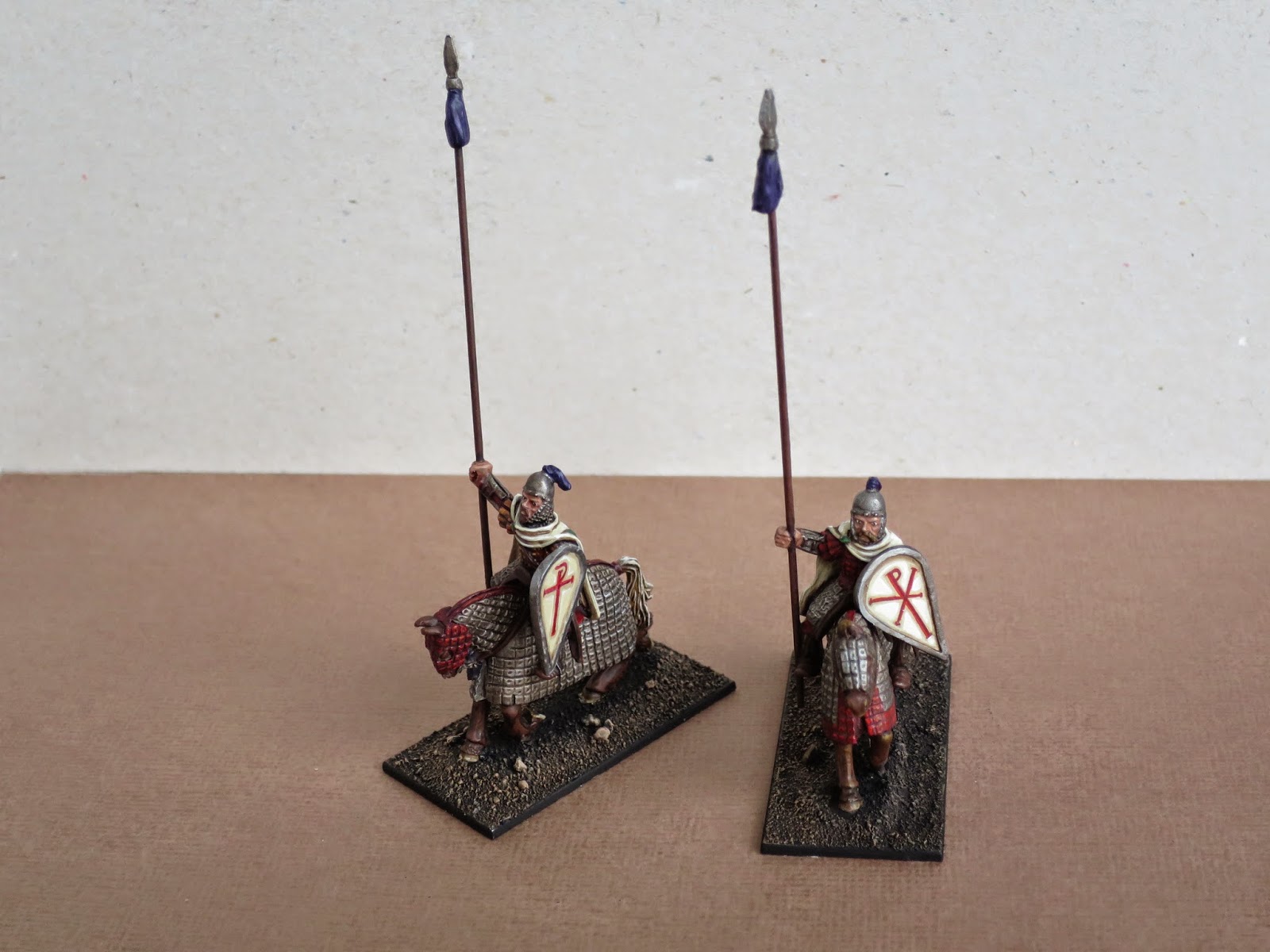 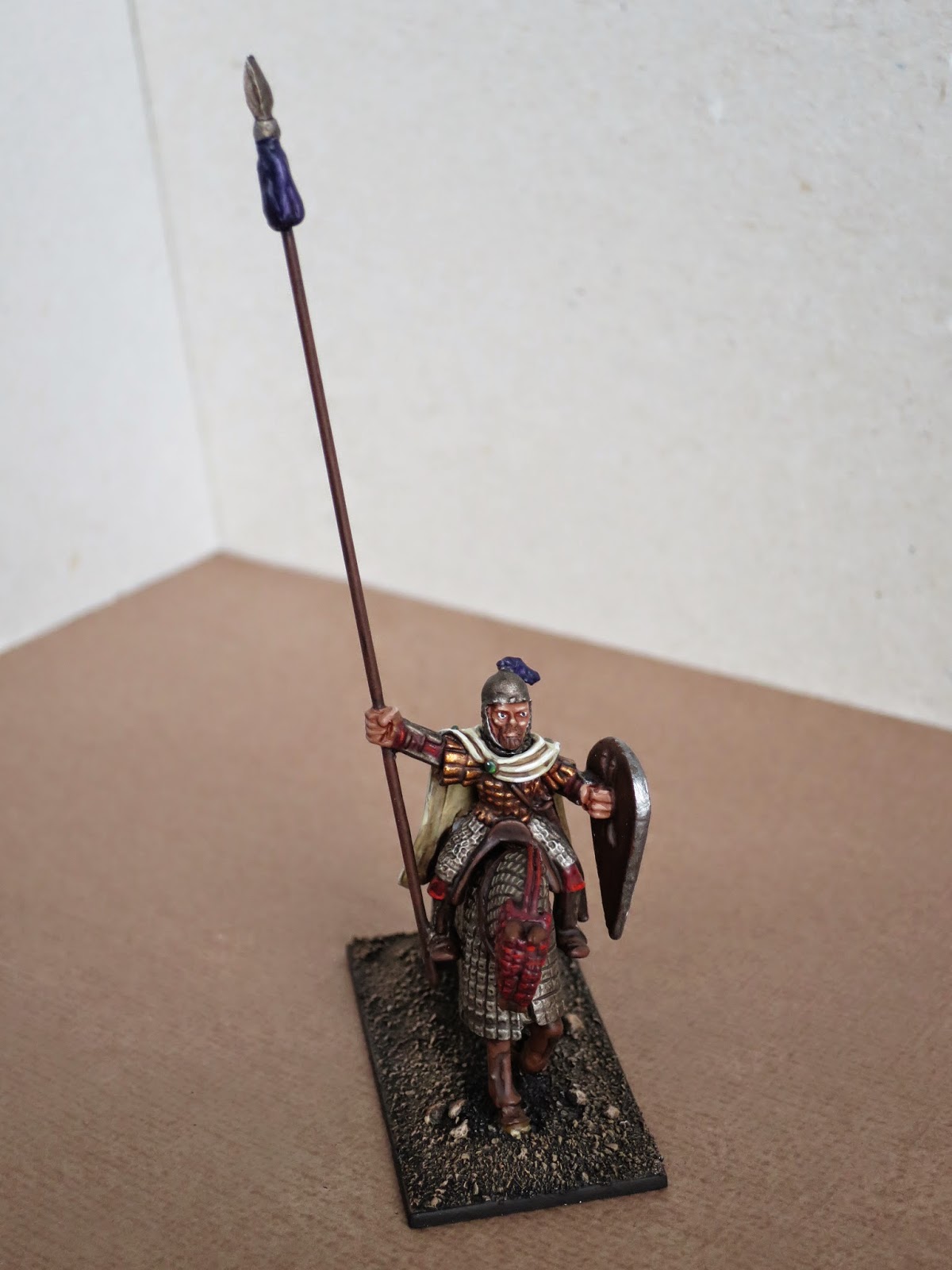 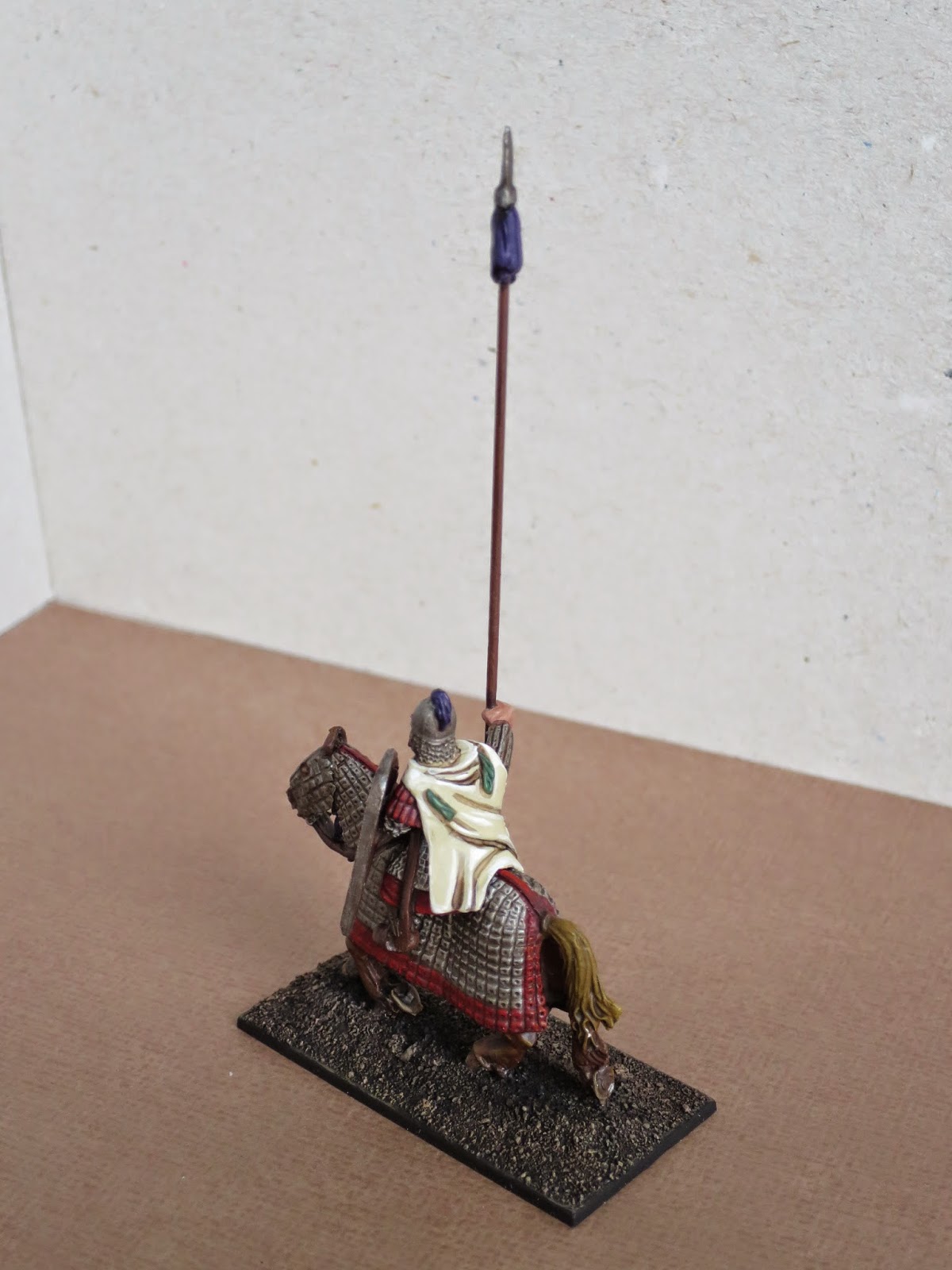 Rear view with detail of the cloak with tassles

In case you're wondering; these are Old Glory miniatures, not Gripping Beast. They come from there "Dark Age Late Byzantine"-range. Luckily the size difference isn't that noticeable (25mm vs 28mm) and the details are good (although finding reference pictures is a true crime!).
I bought ca. 20 and a bunch of steppe nomads second hand, and so far they haven't disappointed me. Although some of the proportions are a bit off -hamfists for life!- the details are crisp and the sculpts characterful, perfect for a skirmish game like SAGA! 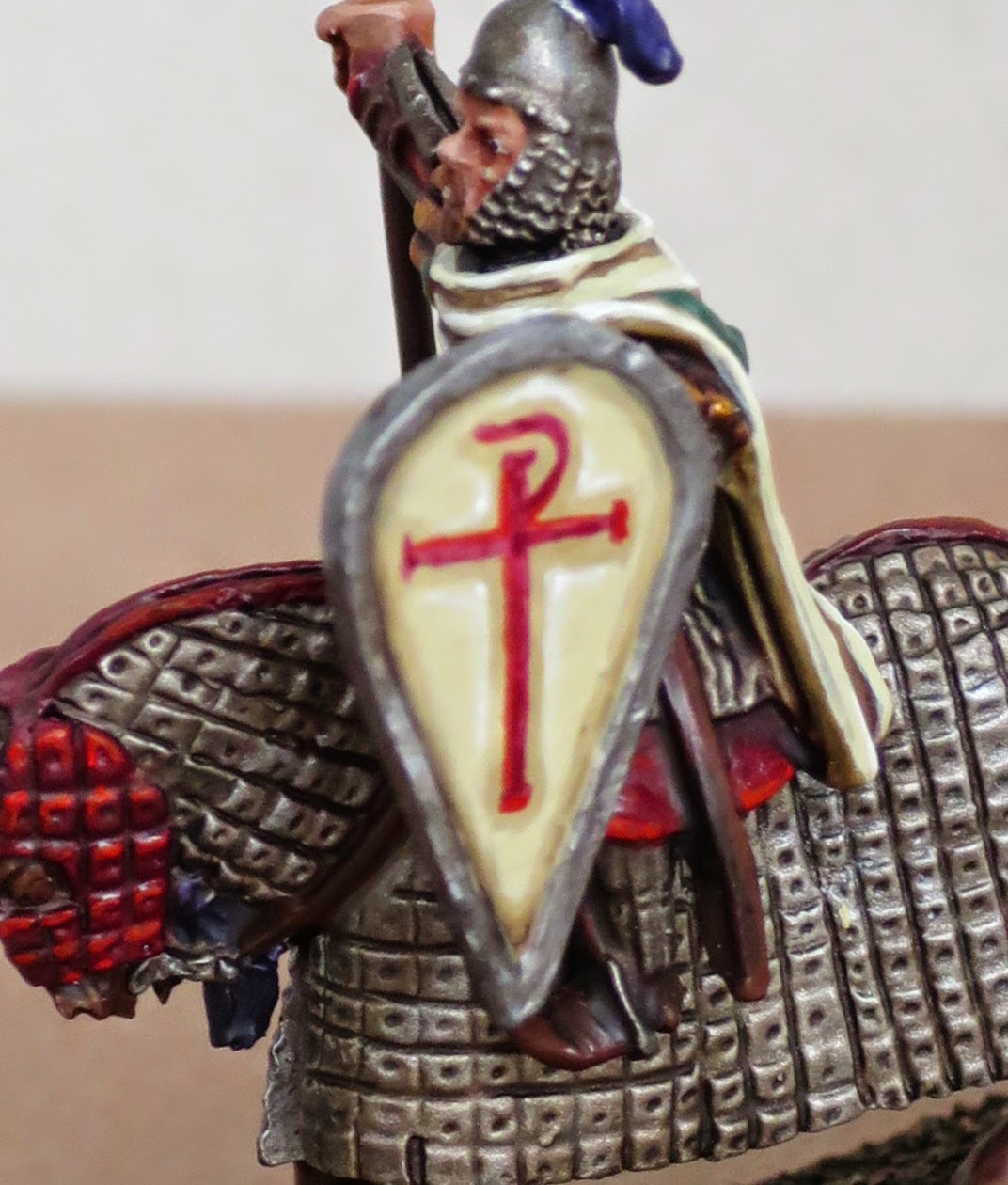 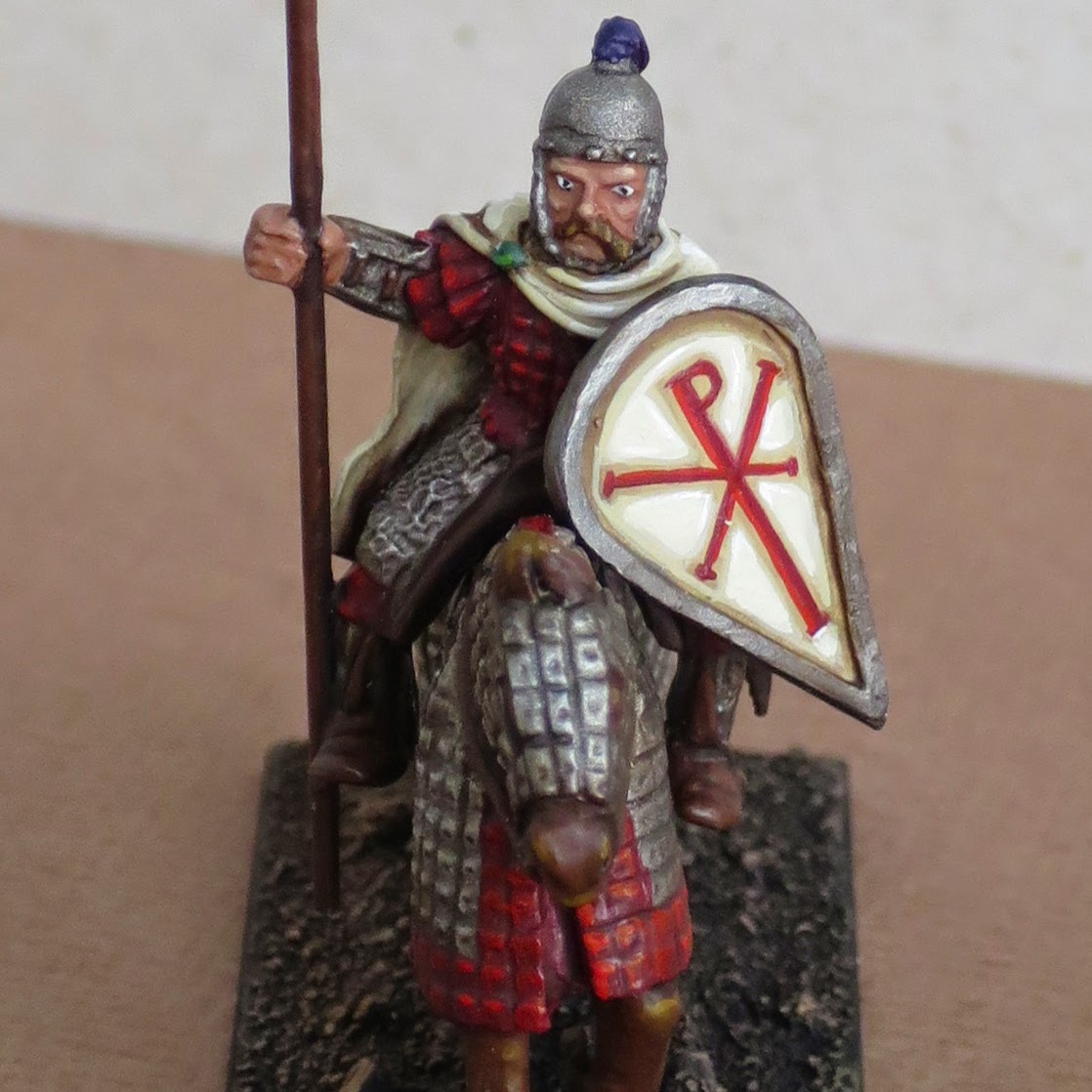 The modeling side was a bit challenging, with having to drill out the grips for the cavalry spear with  too large a drill bit, but in the end -and with the help of a little green stuff- it all came together.

I've especially enjoyed painting the shield emblems and the fibula-gems. All I have to do now is Satin/Matt Varnish them and add turf, tufts and flock. That might be a while though, seeing as the humidity and temperature aren't very optimal at the moment... Still, I think you can see where I'm going!

Next installment will hopefully see me finishing the other two models, so I'll have completed my first official point.

Alea iacta est, or: let's get this show on the road!

Well, everyone has to start somewhere, right?

This post marks the start of my blogging as well as the start of my intentions to pick up historic war-gaming. It might be a bit too early for a New Years resolution, but I figured I could use all the help I could get!

The plan is simple. Blog about (historic) war-gaming and in particular, document the hobby progress on my fledgling SAGA warband (Byzantines if you haven't guessed already).

Henceforth I intend to update this blog regularly with all sorts of hobby goodness, but for now I'll just start off by wishing everyone a Merry Christmas!
Gepost door Tungsten op 08:57 Geen opmerkingen: